When Cats Get Sick 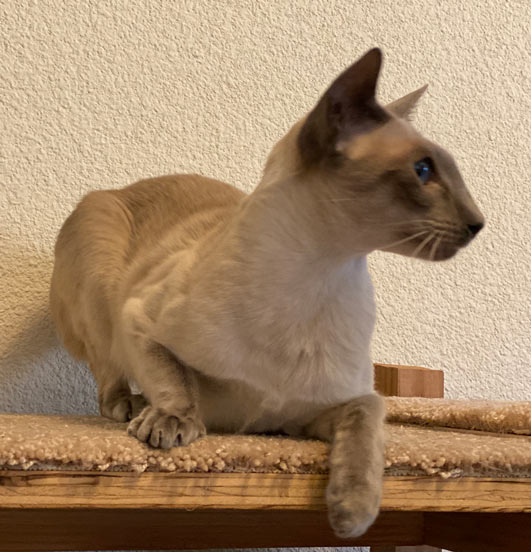 Lucy alert and back to her old self.

It has been a rough month for my little ones.

Sometimes we never know what causes them to get ill. Especially since mine are both indoors. No sliding glass door. No contact with other animals or people. We didn’t even touch another animal, yet they still got sick.

The ironic part, neither was sick because of the other.

Started with Lucy having loose bowel movements. Several days, and still no change. Soon graduated into her meowing and standing on the bed. Her usual MO for a no-no. Band her from the rooms with beds… after cleaning up several messes. Two plus weeks we had bedroom doors closed.

Lucy either did it on the bed or in the litter box. There could have been a third alternative. I’ll take my wins where I can.

Tried pumpkin; it works for either being too loose or not loose enough. Didn’t help.

Next, she started vomiting. Called the vet on the 7th. They had no openings. The next appointment date was the 20th.

Suggestion was to feed her boiled chicken and rice. Wow… that made it even worse. Complete runs, even tinted with blood. Called on the 9th. They said to take her to the walk-in clinic.

So cat in tow off we go to the clinic. Booked for the day. Told to come back the next morning. Line up at 7 AM. Leave Lucy home.

Check in for clients starts at 8:30 AM. Fill out the paperwork and bring the rabies vaccine certificate with me. They took my paperwork, sent me home, and promised to call when I could bring in Lucy.

Brought in Lucy, plus the night before fecal sample. They sent it to the lab for a “Fecal and Giardia” test. Happy to say it came back negative.

No fever, vitals are fine. Just diarrhea and throwing up, plus a runny nose and eyes. Weight had dropped half a pound.

They gave her fluids.

Sent us home with Metronidazole Suspension.

Just squirt it in her mouth…. sure. First time successful, she didn’t know what was happening.

The second time was a pathetic attempt. Two-thirds got in her mouth, the rest on her fur. She washed herself, so no loss of meds. It didn’t taste awful, the fight was unnecessary.

But then again; the same cat that can escape from an Elizabethan collar. (Link) The runt of the litter with killer instincts for survival played into her refusal to adapt to authority. I’m aware we do NOT have authority over this strong-willed cat. She is a sweet love, but won’t conform to any obtrusive violation of her space. Thank goodness she is easy going when I clip her claws.

After that second episode, we buried the medicine in her food. No problem; she ate it.

I was told it was okay to feed her canned cat food again. She was very lethargic for days. Even with Lily’s many attempts to engage her in a chase, she didn’t want any part of it. Days between bowel movements, but soon they were looking more normal. 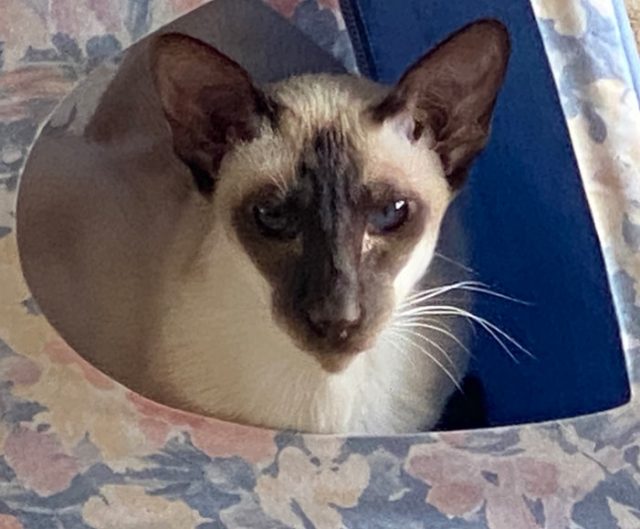 Around the 15th Lily started hacking. The sound of a smoker’s cough… (she really doesn’t smoke) and neither do we. Soon started vomiting. Wondered if she might have pneumonia. None of her symptoms resembled Lucy’s. Both cats ate well during their illness, so it was odd.

Determined to bring both cats in on the 20th. Lucy was getting better, but Lily was getting worse. By the morning of the 20th I asked if I could bring both cats. Nope! Not even for a quick few minutes. Lucy had improved so much overnight. I told them I wanted to switch cats for the appointment. No problem, so I took in Lily.

Lily didn’t have pneumonia, but had shallow throat breathing. The vet wasn’t sure the medication given last month could help, but agreed to try. She coughed 3 times at home and it wasn’t as severe. No more vomiting. The next day, they were both playing. The morning of the 24th, they were flying through the house as usual. So happy to see my cats healthy now.

Lily had the same drugs on May 10th and in July 2021. Hope the need for these medications ends in the future. Drugs are: Cefovecin 80mg (is an antibiotic) and DEPO-Medrol 20 mg. (is an anti-inflammatory steroid).

Lily goes in for teeth cleaning in July and Lucy in August. Maybe this will help with their overall health.

P.S. Has your cat ever been sick and the vet doesn’t know what is wrong, but treats with a few medications and the outcome works?