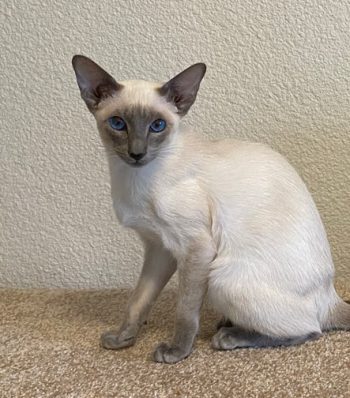 You’d think that an animal with the scientific name of “Felis catus”, might just have killer instincts.

Years ago, presented with an embarrassing statement of proclaiming… “No self-respecting mouse would dare enter my house with 5 cats.” A few days later, a mouse scurried across my living room floor.

Devastated that at least one of the five wasn’t in hot pursuit. Nope. They ignored the intruder. Cat dialogue; “He’s been here a while. Besides, he doesn’t eat much.”

My first cat was a fierce hunter. Taking down birds, mice, gophers, and even a pet rat that escaped. It was white, so I’m sure it once was a pet.

I guess I thought all domestic cats have hunting genes. Well, maybe they do. But not big game. Houseflies, moths, and if I’m lucky… spiders!

Hardly a survivalist like their alley and barn cousins. But contented with their tranquil life.

Lily and Lucy wait at the backdoor for a beetle, taking the wrong turn as it slithers under the door. They followed. A gentle tap to see the beetle move. Nudged with their noses and jumping backwards when it tries to escape.

Sniffing to locate the beetle as it disappears under a cupboard… if I don’t get it first.

Lucy caught a couple of moths and found out they were tasty. Any moth that enters is fair game. We are progressing.

They love it when a fly sneaks in the house. On the warpath back and forth between windows. My venetian blinds have survived. Grateful that they are not as aggressive at the assault.

Lucy impressed me as she snatched the fly in mid-air and brought to the floor. Was quick to eat her kill. Lily observed. She tried to get a bite. There wasn’t enough to share.

Watched as she tracked a small spider. She let one go under the furniture. The next spider hunt was a success for one happy cat. Not so great for the unsuspecting spider.

Now I can only hope she will graduate to large spiders. No large ones in over a month. Might be that we eradicated the large ones. And Lucy polishing off the little guys.

Could I be pest free in the house one day?

Maybe the “Little Tornado” can help eradicate bugs and be rewarded with a protein snack.

Of course, I don’t have any unrealistic hopes. We had little frogs coming under the door last year. Thinking it was a stray leaf and when bending to pick up, it jumps. That could be hilarious if one enters. Two cats and hubby chasing a tiny frog. Me laughing and freaking out all in one breath.

PS: The day after I wrote this, a large spider appeared. With plans to attack, it darted out of sight. Destroyed are my dreams of a spider free house. One a month is better than finding one every day.

Do you have indoor cats? Is your cat a good hunter? If indoor only cat, does it catch flies, moths, spiders, etc?

Or does your fly swatter work better for you?