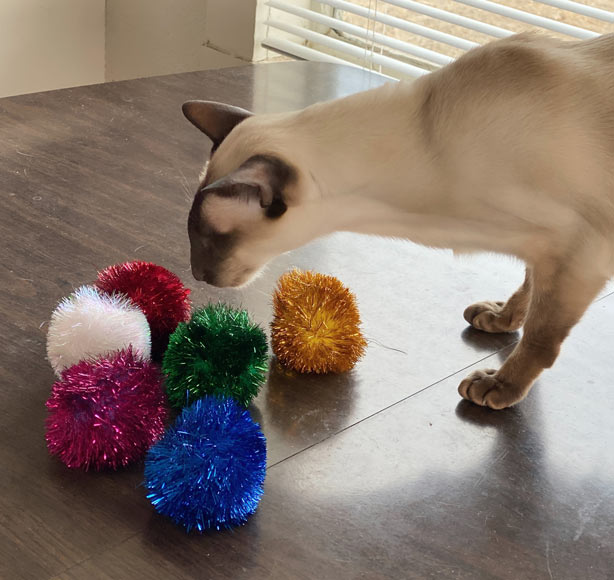 Lily checking out the new supply of sparkle balls

My cats have loved the sparkle balls I got years ago from a fabric store.

My first introduction to the sparkle balls was in a cat toy Christmas stocking. They self-destructed in days. Hence, the hunting expedition for a suitable substitute. The 48 balls survived the ravages of energetic cat play for years. Now only 27 remained.

What happened to the other 21? Not sure. The vacuum cleaner may have gobbled up a few. A litter box casualty that got buried. Didn’t get  scooped because it was washing day for the litter boxes.

There were 3 larger ones that Lily liked. They are missing. One escaped outside, must have got kicked out when we opened the backdoor. Are they under the washer, freezer, or dropped behind the bookshelf? For now, the 3 are MIA.

So the hunt for larger sparkle balls.

I found ones that were jumbo and the reviews were mixed. Some cats tore them up within days, others had no issues. I took the middle road on that one.

Each cat is different in how they play. And when they are packing them around every waking hour, the length of durability comes into question.

After seeing how huge they were, I ordered the smaller size, hoping that both cats might enjoy them. Lucy still likes the tiny ones that end up under the fridge. And not interested in the new ones. Lily still prefers the big ones and as she destroys them, they are being removed.

Lily likes to pack the big ones around in her mouth. And still trying to figure out how to carry 2 of them. Although her attempts have not been successful. She has resorted to packing one and batting the other simultaneously. Ingenious cat.

She wants us to throw them in the tunnel or the tent. We oblige, as long as she brings them close enough. She is relentless in her duration. Lots of exercise for us, honing our throwing skills. They don’t fly straight due to the ever changing shape they take on by being packed. If bounced off the floor, it rarely goes where intended.

As each ball gets dismantled and beyond the constant stuffing of contents back in, it gets retired to a closed box. Decision to evaluate the crisis has morphed into getting my crochet hook out and learning how to make a ball. Doesn’t look too shabby. But not well received. UGH… My reaction was oh well, when the others are retired, she will have no choice but to play with the ones I created.

Great theory. Cats are not always predictable. The worst-case scenario, she could quit playing with balls.

I purchased new soft yarn, hoping to make something more agreeable to her liking. Plans to make small compact ones for Lucy. Lots of possibilities forming in my brain, to make my little darlings delighted. But you never know with cats if they will love it or hate it.

I bought a crinkle toy for Molly (past cat) for Christmas years ago. It had a red hat. She just gave it a sniff and walked away. That toy sat for 9 months. One day, she picked it up and packed everywhere. We nicknamed it Buddy. I repaired Buddy numerous times, removing the crinkle material and stuffing it with something more durable. She played with it for years. Molly’s story.

This is a lesson in patience. After it smells right, cats will like it. Yet other cats the moment I give them a toy, they are on it like glue. Others show zero interest. I learned to never throw out any undamaged toy. Even things not considered cat toys are fair game.

Lily and Lucy love balls. I guess I’ll be in the ball making mode for a while. Giving them lots of choices and hope that they will be a hit.

Gallery of the Sparkle Cat Balls