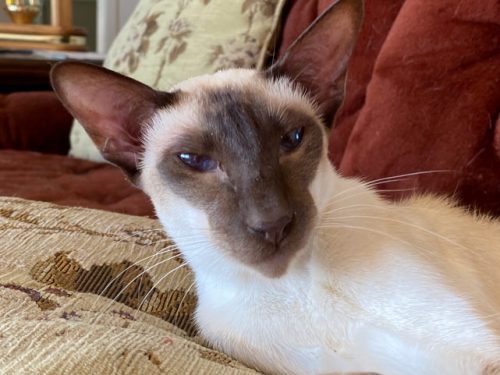 The cat’s natural instinct is to climb. And observe from a safe place. Another typical behavior is to get low and hide, which represents fear.

The cat’s small stature on the floor is an inadequate perspective of their environment. Providing high places invigorates their spirit for adventure.

To relate to being on the floor. Imagine walking through the tall skyscrapers of San Francisco in the middle of town. You feel insignificant compared to those monster buildings, looming on both sides of the street. Barely able to even get a glimpse of blue sky. The sun struggles to shine in this concrete jungle. Very depressing if you had to be on street level your whole life.

I think to figure out the cat; it needs to be on your level. Counters make them equal, able to gaze in your eyes and relate as part of the cat clan. I, for one, enjoy being part of their inner circle.

I give my cats stimulation to their little world. Since they are indoors, they don’t get to explore and climb fences or trees. To fulfill those desires of exploration, they need many levels of lookout points.

The cat tree once sat in the living room; across from the mantel. Previous cat never attempted the leap, although she looked. Lily arrived before Christmas of 2020 and for a less stressful environment, we put the Christmas tree up before she arrived.

Once we decided it was time to put it away; the choice was to return it to the original spot or leave it. Knowing how well she could jump, we measured the distance to the mantel 22 1/2 inches. Abort that idea. The cat tree remained at the other end of the living room.

Advantages for them, to move it; a complete view of the living room and kitchen. But preventing the mantel leap was important. A few places they haven’t attempted an expedition to and hope never will.

Example: The washer and cupboards beside it. Counter with the stove and one more leap to the top of the fridge. The mantel jump attempted. Well, at least the brain cells have been churning with that endeavor. Aborted with a resounding “no” from us. The curiosity is furious, but do hope I can keep Lily from trying.

Cat behavior depends on who interprets it.

Now, if the cat has any say, all bets are off on what’s acceptable. For me, it lies between not okay, to heaven forbids… she must be a crazy cat lady.

There are a few rules for cats. As each new one entered the domain; it has radically changed from the first cat.

We allowed our big white indoor/outdoor alley cat to have his front feet on the table. He followed the rules, although lapses happened.

One day my parents were visiting, he bent the rules. A white tablecloth on the table. Beside it was an open window. There he lay, sprawled out, camouflaged, enjoying the breeze. My mother looks and asked him if he was supposed to be there. My answer was “no”. I was quick to put him on the floor. My mother was amused, which was shocking.

Ten years into cat parenting, we acquired 2 Siamese. Cat rules changed. It was I who now needed to conform to cats ruling the house.

Sure, I tried to enforce my old antiquated ideas of cat protocol, but they weren’t having any part of it.

Over the years, I conformed and adapted to the changes.

Once they were old enough, everyone slept in the garage. Maybe at 4 months. Many eons ago, so not sure when. They weren’t alone, as we still had the first cat to keep them company.

After the first cat’s life ended, they soon graduated to indoor living. By the 16th year of cat ownership. No one slept in the garage.

A few made it to our sleeping quarters at night. Pinned to the bed, unable to turn over, was not fun.

These latest 2 don’t sleep with me for my safety. Not a fan of having skid marks across my face when they are in hot pursuit. If one in the room. The other meows and  scratches to gain entry.

Rules had to change for survival mode.

As for other house behavior.

I tell them to get down and lots of “no’s”, they glare at me and doubt I’m serious. Learned to pick my battles. Siamese are adventurous and embrace challenges, even if that means being stubborn.

My success is just keeping them off the stove. And with enough yelling “HOT” at them was the trick. Lucky for me, they stay off the whole counter where the stove sits. Makes one safe space for a few things I keep track of, such as paperwork for appointments, letters to be mailed, etc. One sacred place in the house that doesn’t have everything locked away.

I know it may shock many to see my cats run across the counter, but it’s their house as well. Rather lay out the rules hoping that enforcing one area to remain “a no cat zone”, will at least insure sanity. I can’t stand watch over them 24/7, so they are free to do whatever when I’m not supervising.

The previous cat, Molly, never got on the counters, dressers, etc., but joined us at the table. Food remained safe. Maggie became blind at 14, and couldn’t navigate the jump to the counter. So for 9 years, the counter was free from cat attacks.

Cats’ natural instinct is to climb. So being up high is part of what they enjoy doing. The higher, the better in their eyes. Not that I want to build walkways one foot from the ceiling. If I had a designated cat room, it might be worth considering.

For now, they will live within the confines of “people’s living space”. They have a 6 foot cat tree in the living room corner. They love to fly to the top and grab each other.

Cats are not like your 2 legged family members. They are not out in public, causing havoc as unruly children. It doesn’t matter to society if you spoil your cat rotten in their own home. Well, house guests might not appreciate it, but hey, they don’t have to live with you or they can refuse your invitation.

I put my cats behind a closed door if the guest’s visit is brief. Many times, they appreciate separation from your guests. The stress of having company can make them fearful. Being in another room makes it easier for them and you.

You never know what goes through their little brains and impossible to explain details with them. Best bet is trying to predict how they might react to new situations. Prefer locking my cats in a room, to prevent escaping through an open door. Or have to locate them after company leaves.

A cat trotting across your counter might not appeal to most. I get the connection, litter box, floor, and then a bounce to the counter.

Being aware of health concerns is easy to manage. Maybe eating dusty, low growing berries as a child has helped my immunity. Whatever it takes, as I can picture animals trucking around in amongst those free snacks during play time in the country, with unwashed hands and still surviving childhood without being ill from eating them.

I put our food in bowls and on plates. Use cutting boards that are washed and put away afterwards. Rare for me to put any food directly on the counter. When I plan on doing so, I use soap and water, or a vinegar solution on the counter and wipe with paper towels. Cats don’t get on the counter during cleaning and food preparation.

Adhering to a sterile environment may not be great in building a good immunity. I think it falls along the same line as “don’t eat raw cookie dough“. Knowing your eggs are clean and safe is a normal precautionary to keep from being ill. Eaten raw cookie dough for as far back as I can remember, never sick from it.

Appealing to your cat’s adventurous spirit. 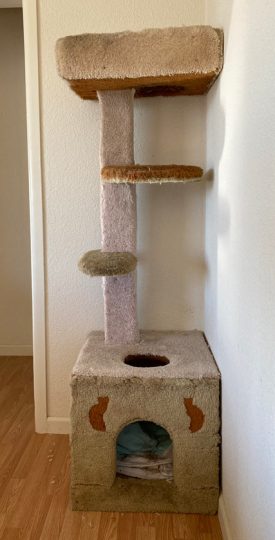 Provide for them a cat tree or even a window perch. You don’t want them scratching your furniture, so they need an alternative. I had one cat that never used the tree to do her scratching. I bought her a flat sisal scratcher. She enjoyed standing on it to scratch.

Every cat loved the cat tree. It went through many recovering procedures. Has survived for 42 years and counting. If you decide to build one, make sure it’s strong and well designed. If cats don’t feel safe, they won’t use it.

My 6 foot cat tree base is a 2 feet X 2 feet box with a hole in front and another in the top. They can hit the tree at whatever speed they can travel at and it will recover from the impact. It is against the wall. It shakes from them chasing each other, but never a fear of it toppling.

My cats love to sit in the windows.

Previous house, we had a sliding glass door and they lined up by the screen, sniffing the breeze. Had a hummingbird feeder outside the door for their enjoyment. The hummingbirds flew low to look for the cats. It was a game they played together. Very stimulating for the cats and the birds got sugar water.

Limited interaction with the big outdoors in this new home. Plenty of cat toys. Petting, hugging, and talking to them fills their day to prevent boredom. They love to chase each other. More room to run at this house.

How do you spoil your cat?

Do you provide them with look-out points?