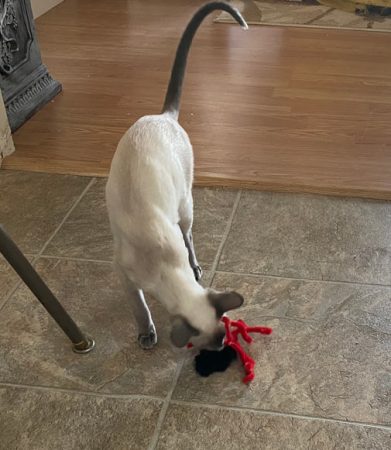 Don’t know how many times in the past month, I have said, “What are you doing?” or “What have you done?”

After 3 months, Lucy must have figured out she can do no wrong. Thought we got past the ‘in trouble behavior’. As in, leave this alone or quit scratching on the furniture.

No end to what this little one can destroy. I should have kept a box for destroyed toys, just to recall the day I found them laying there on the floor in pieces. I cut several tails off mice toys as she has become obsessed with chewing on them. Don’t need her ingesting material.

Lily did a 45 second destruction on a furry mouse, no other cat was ever interested in it. So 45 seconds of fun was worth the laugh. Don’t know how I acquired it, but believe it was a gift from a cat show.

I sewed the cat bed on the top seam before the kittens arrived. Many years of use were taking a toll on the fabric where it folds. Thinking the stitches run across the top should secure it for a few more years. Lucy had been ripping at it with various parts, becoming detached from the bed. Took it up and now making major repairs.

Had the cat tree since 1980 when we first designed and built it. We had to replace carpet in areas over the years. Only where cats scratched needed replacement carpet. The front has always remained in tack. Glue held in place and no cat has ever torn it off until Lucy. We had used scraps from a carpet store and pieced together a 4 inch strip on the bottom front. The other morning I got up to find it pulled loose. And bits of fiber scattered on the floor. Tacked it down, in hopes it won’t need future repair. But I doubt that scenario.

One red felt mouse that was well constructed, seen its last day a few weeks ago. The abuse of being chewed and yanked on made it resemble a bushy furry mouse. The next morning I found bits of white fluff over the floor and bits of red fuzz. Lifted the tissue paper that has been a part of their fun since Lily’s birthday on the 1st of March. On the floor was a gutted red mouse. As voracious an act, you think she could snatch up live house spiders and make them disappear. Nope. Just a gentle play with that beast walking across the floor. Out comes the fly swatter and off they skedaddle to avoid being anywhere near the thing that goes whack.

Had given them a spider toy, which a previous cat loved. Since that was the only toy she played with, we went out and bought 10 more. She wasn’t hard on them but replaced a few. With an ample supply of new ones, I gave Lily one. No interest until a few days ago. Cats are like that… things need to smell right first. Molly waited 9 months before she played with a toy we bought her. Then they became best buddies, to the point of many repairs to keep it usable for her.

The black spider with red pipe cleaners for legs. Survived many months of play for Minnie. Two days into serious playing, Lucy has detached one leg. Now a 7 legged spider. It is missing lots of black fur. Black pieces of fur pepper the carpet from a once very furry spider. How long before it self-destructs is anyone’s guess? One day later… she has a new spider. She may be “spider-less” if this keeps happening.

On the bottom shelf of the coffee table I had a box of Kleenex. It has been there since these 2 characters arrived. Never bothered with it until a couple of days ago. Lucy was grabbing tissue out of the box. Okay, fine. I just pushed it back inside the box and figured that ended the curiosity. Nope.

The next morning the box is on the floor 5 feet away. Stuffed the tissue in the box. Turned upside down, returning it to where it used to be. After yesterday’s lunch, the box is again on the floor. Put it turned over on top of the coffee table. Next day after breakfast. Lucy again has the box and has yanked out maybe 10 sheets of tissue and lots of pieces adorned the floor beside her. Lily is looking at her from 4 feet away. With a priceless expression, “I’m not a part of this.”

Grabbed the box and the wads of tissue.

Need to find a box they can’t open. Do hope she doesn’t start attacking every tissue box in the other rooms.

They attack one planter on the floor during play, and numerous leaves are fair game for removal. They have munched two vases of flowers. I find little buds or flowers on the floor. Exposed when they bat them around the room. Four other vases they have not touched. One is on a 6 foot high mantel. Lily has her eye on it.

Try to keep them out of the house, but they sneak past and tease the cats. Zooms past the cats to another window with them in hot pursuit. Wouldn’t be so bad if we didn’t have blinds. Don’t love them, but not ready to replace them throughout the house with curtains. Lucy chases them into the kitchen and I hear the rattle of blinds only to find her in the middle between the slats trying to get the fly. Another time she was behind the blinds. I just don’t think those things can take cat abuse daily. So now with fly swatter we are in hot pursuit of the unwelcome guest. And the warm weather has only begun. An ongoing challenge between us with fly swatter and the cats.

Latest entertainment is hanging out by the backdoor. We wondered why? At the door’s corner opening, beetles are popping in, as the cats eagerly wait for their entrance. Fine, if they ate them, but no such luck. Follow and tap until they disappear under a cupboard, stove, or fridge. As they come in, we stomp on them. Sprayed outside the door when they were asleep. Supposed to last for 6 months… we shall see. Do hope so. Gave Lily a ball to get her away from the door vigilance. It worked. She packed that ball back and forth for a good hour. Finally dropped it and shared with Lucy.

I am waiting for the next OMG moment with these kids. Yet what we expect them to bother they don’t. We play a game of Tri-ominos and they are right there watching. We even spin the pieces around, they watch but never touch. They run across the table. We brace ourselves. Hoping they don’t knock pieces off, making havoc of the game. But they walk over the pieces, never touching them. Amazed that they can sense where each piece lies as the game has constant changes.

Lucy is not as frantic at meal times. She no longer has to compete with litter mates. Lily allows her to push her out of the way, so no competition. They eat in different rooms so Lily can eat. When I cook up chicken for them, they are both locked away and released to share in a plate of cut up chicken pieces. Lucy has to be controlled to share. She is getting better at this task.

We are wondering what next. Siamese never grow out of the mischievous stage. This can go on for years. I am game for the challenge. They make us laugh and bring joy.

This is a similar spider to the ones I have. Mine are red pipe cleaners. I removed the eyes and elastic. If you hang this up unsupervised and they play with it, it could wrap around their neck. This happened to one of our cats with a bird toy. Luckily, my husband was there to rescue Andy from strangulation. NEVER leave the elastic on unless you supervise play time. Reference on this article. Indoor Hazards for Cats

Cat Mice an all time favorite for most cats. Keep an eye on the tails, to make sure they can’t be tugged off and to see if they have been chewed.

Do you have any mischievous cats? What is your cat’s favorite toy?