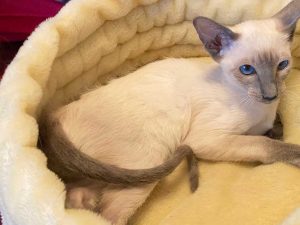 A wee kitten at 4 months. She was the smallest in the litter. My request was the one with the best personality. Hands down, she is full of love and plenty of spunk. Perhaps when you are the smallest, you try harder.

The old days I remember with newborn kittens. They pushed and shoved each other to get milk.

The breeder insisted I put her in a closed room. Suggested the bathroom. After 10 minutes, there was a crash, bang. Wondering what I might encounter when the door was open. Horrors, she was going nuts. She was flying off the walls and jumped to the window. For a little cat, it surprised me how she reached such a height.

Put her back in the carrier and moved the food, water, litter box, cat bed into my bedroom. Brought her in and tried to calm the wild beast that I witnessed in the bathroom.

Lucy hid between the wall and dresser. Tried to limit her hiding places. We moved the dresser closer to the wall. Retrieving her from under the dresser got crazy. We removed the drawer and placed it on the floor. To get her out became easier. Missing again. She blended into the cream-colored wall in the open closet. Perched on the shoes, she was hard to spot.

Removing her from hiding spots, giving lots of attention worked while there. Comeback later, it was a hunt and search mission.

Similar litter to what she had used for 4 months should have resulted in compliance. Why she stood on the bed and meowed loud, then pee, was puzzling. Two mornings in a row. Discovered, she had also been peeing beside the bed.

Moved the litter box to another place in the bedroom. Put cardboard on the floor by the bed and cat carrier on top. It worked. Very relieved, as I was wondering how to correct this unacceptable behavior.

Third day we put her in a larger cat carrier. Placed her in the living room during the evening. Lily walked by the carrier. Giving Lucy a hiss and growl. Day 4 the same thing. Day 5 and 6 we put a harness on her attached to 3 leashes. This gave her an opportunity to explore. And Lily, a chance to see her new roommate. Day 7 we let her have freedom for the evening. They ran and played, but still an occasional hiss from Lily.

Day 10 they were together full time, other than mealtimes.

Lucy respects her big sister. Lily has found she isn’t a threat. No longer hisses or growls. Taps her when she wants to play. If she jumps on her and Lucy meows, she bounces back.

Lucy purrs and is easy going. The only thing that makes her frantic is feeding time. Runs around in circles and between one’s legs. An obstacle course, aka tripping hazard. Being the smallest of the bunch, you learn to push and shove. Will be glad when she figures out her competition no longer exists.

She hasn’t picked out a favorite toy. Needs to try a few to see what grabs her fancy. Lily loves the pom-pom balls and Lucy is content to watch her.

They gallop after each other in a mad dash back and forth. Harmony exists between the two.

Now I am wondering if they are plotting a takeover of the domain. They already have our hearts.

Have you signed up to get your Free copy of “Cats vs Us”, we never share your email and

we are not requiring you to leave a name.