How to Keep Your Indoor Cat Entertained

Is Your Indoor Cat Bored?

Is your cat sleeping more than usual and packing on the pounds?

Time to make note of the waking hour activities. Is he/she begging for food or listless most of the time?

Bored cats use food to fill the boredom.

Challenge your cat’s mind with interactive toys. Even just a new toy with unfamiliar smells will stimulate their curiosity.

How do you get them interested in fun things?

Cat trees are a good start. An only cat needs to play. 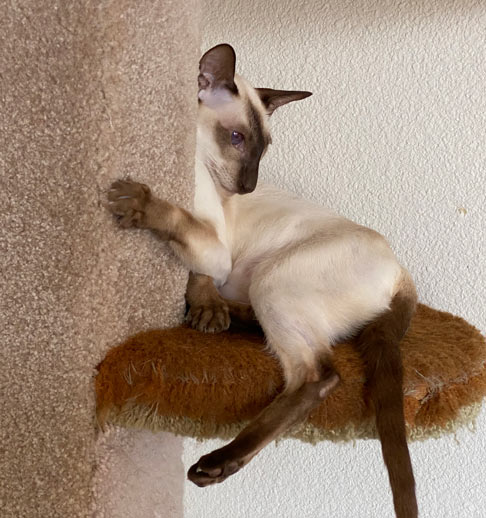 Lily hanging out on the cat tree

I chase Lily when she wants to play. (Lucy is napping.) She likes when I say “I’m going to get you.” Which usually results in her leaping to the cat tree. She enjoys hiding around the post when I try to grab her. Carefully mind you, as I don’t appreciate being lacerated. Her eyes sparkle and she loves the interaction. It is comical and invigorating for both of us. Lily swinging on the post and on to the top shelf. Me maneuvering with caution as she is quick with her long legs.

Lily is a great retriever cat. She brings a pompom ball and I throw it. Other times she will play on her own, stuffing it under many things that results in her unable to reach it. Which requires a horizontal position on the floor with flashlight. To check the obvious hiding place… under the refrigerator!

Another thing Lily does is to pack the ball around in her mouth, meowing.

Lucy puts her whole heart into playing with balls or mice. Her days of mass destruction have lessened over the last disaster months ago. Is she maturing? Who knows? The rate she was destroying toys, it was looking bleak for survival of cat toys by year’s end. 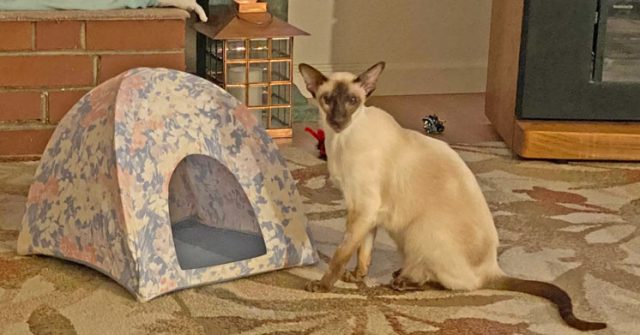 Lily by the cat tent

Bought a cat tent back in the days of cat showing. (1987 – 1998) The resident cats were okay with it, but I wondered again if I just wasted my money. Most of them preferred the open plush cat beds, not the cat tent.

Stored in a box for years. Assembled the tent. Would they like it? Well, they sure did.

Not so much for sleeping. But jumping in and out, making the tent airborne. Lots of times they have flipped it on its side, even with the entrance facing the floor. Great place to scare each other.  Stuff toys under or make it buzz across the floor.

Don’t think the tent creator intended for it to be a missile. But it has provided them with hours of entertainment and lots of laughter for us. Excellent investment. 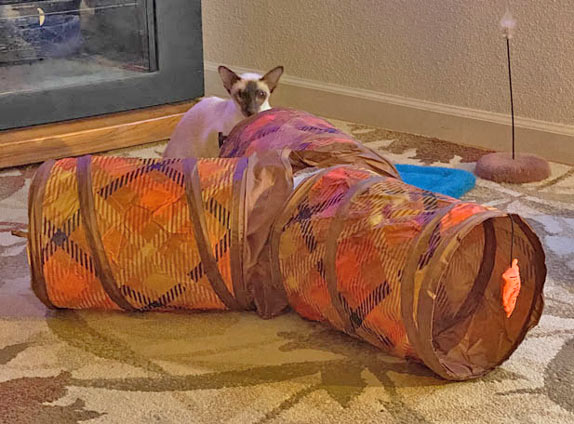 Guarding the tunnel for action

Lucy just celebrated her 2nd birthday on September 17th. So, out of a crazy notion, I bought them a tunnel for her big day. Cats will be cats. And nothing is ever a guarantee.

Lucy wanted nothing to do with it. Lily was soon charging through the tunnel. Jumping out at Lucy was fun. Not so from the one that kept getting scared.

Lily has no problem rolling around inside the tunnel. Her eyes glistening with mischief and wiggling body movements as she bursts out the other end. Lucy watches, but retreats to a safe distance. I’ve seen her venture in the tunnel when Lily is in another room eating. Someday, they will chase each other through the tunnel.

Lucy’s lack of enthusiasm for the tunnel isn’t a surprise. Took a while for her to embrace the game of sliding on gift tissue paper sheets on the floor.

Engage Your Cat in Play

Is important to engage cats in play, especially if they are an only cat. It doesn’t take much effort. Cat interaction is short lived, soon they’re ready to nap. Corresponds to you being tuckered out from chasing them!

So what’s next for this duo to enjoy? Christmas will soon be here, which entices their curious nature. Safe for cats is important. I decorated for Halloween. New things to attack if it looks inviting enough.

Bored cats don’t complain. But they will shutdown, eat, sleep, or if they are overactive, just may destroy things you value.

Note: The ironic part of this post: It was Lucy’s birthday and not one picture of her in it. But the best photos seem to be of Lily, she did the tree, tent, and tunnel justice in her enthusiasm for all things fun.

Do you have a cat tunnel?

It can be a lot of fun your cat, but as I found out… not all.

Perhaps if I only had Lucy, she wouldn’t be scared… NO CAT JUMPING OUT AT HER. This is where you can engage your cat in playtime. Tossing a favorite toy in the tunnel will entice them to venture inside. Cats like boxes, so this is just another alternative for them to explore.

Lots of styles of tunnels to choose from.