From a Cat’s Perspective 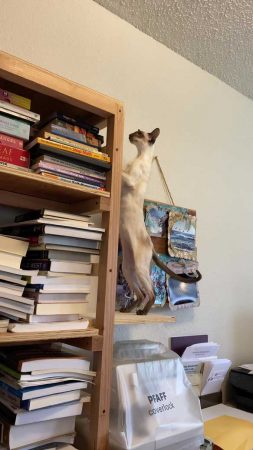 Lily, getting ready to jump.

The flying squirrel, aka Lily, has been pushing her limits with us.

She wanted to get on top of the 6-foot shelf in the office. Many attempts, with a firm ‘NO’ have gone on deaf ears. She has big ones, so I know she can hear.

Persistence finally landed her on top. Bolted up with a flash before I could abort the leap.

Back and forth she went as I tried to grab her. Hoped the scare of being dragged off the top might discourage future jumps. NOPE… not in the least.

We had been fighting this crazy adventure of hers for weeks. I guess she decided the day arrived to conquer the unknown.

How to keep her safe and not damage my ‘Baby Lock’. The machine is directly below the landing from the top. How many times could it take a beating was my question? No place else to put it. The solution was to build a shelf above my machine. This gave her a 2-foot jump. It worked.

But it doesn’t end there! Now she wants to crawl under the shelf. She also began attacking the wall-hanging beside the new shelf.

Lily still eyed shelves with spaces to climb on, don’t know what she has planned.

Is this office adventure the compromise to conquering a flight to the mantel? I accept this as a better choice.

Laughter was lacking in the house after Molly died. With 2 wild and crazy kittens, our life has turned into chaos.

They are hilarious. Yet at times I think I’m dealing with a couple of defiant teenagers.

Lucy watched as Lily ascended to the top, and I guess she thought it was worth a try. As she walked across my desk, I told her, “No, you’re not old enough for that.” She returned to my lap. Averted, for now. How long will it last?

Lily and Lucy on top of the bookshelf.

A day later Lucy braved the unknown and jumped to the top. Glad we had decided to add carpeting to the top and the shelf.

Conform to their wishes seems to be the solution. A fighting battle I doubt we can win. Love our cats. We make adjustments to have harmony.

Moved the wall-hanging to another wall. If left, a total onslaught of the ribbons hanging from it was apparent.

If that was not enough. Lily found great fun pulling at the carpeting on her new hideaway. She ripped pieces off and tossed them to the floor. Yes, she watched as they landed on the floor. WHY?

I like to think I am winning, but they seem to be in control. If I give in with one thing, will they leave other things alone? Can only wish.

To show their agility, Lily made a flying leap from the floor to 2-feet up, the distance was 64 inches. Can I sign her up for the running broad jump?

The challenges are coming daily. As each day begins, we wonder what trouble they will find.

Lily decided the new place of the wall-hanging was still accessible. There was a slim box that housed a very heavy board game. She latched on the edge of the box. Crash! She and the box fell to the floor, pinning the lower part of her body. Unable to claw her way out, I quickly lifted the box.

Unable to tell if she had any broken bones. Concerned that she may have a punctured lung. Saturday 4:40. Why the after-hours time? Costs a fortune for a vet to look at them. The vet found no damage. Sunday she is back to her chipper self, although guarded with a slight limp. “Sports injury” my hubby says.

Has that stopped her from trying to take flight? Nope. She is contemplating her next move. Again, we modified the bookshelf. The entire system became unstable when the books were up high. Removed the top half and kept their carpeted new play area but shortened the height by 2-feet.

From a cat’s perspective

What is the attraction for height? May be the challenge or is the mind so fine tuned into their wild animal instinct? Up high can represent safety from other predators or a vantage point to watch prey.

We have moved numerous things in the house. Had to stack 2 boxes (6 inches deep by 24 inches long) between the freezer and fridge. Need another one to go on top. Purpose; to stop the hiding behind the fridge and crawling under the freezer.

Opened the door to their Disneyland. When Lily recovers from being battered by the fall, discovery will begin. Do I have things secured? May take a few weeks to answer the question.

Have you signed up to get your Free copy of “Cats vs Us”, we never share your email and

we are not requiring you to leave a name. 29 pages of information.


2 Responses to From a Cat’s Perspective