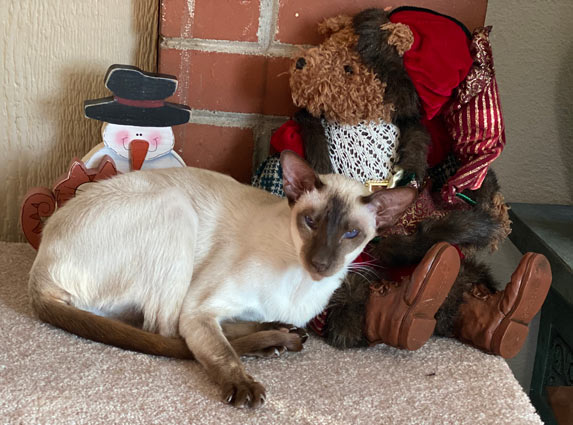 Lily with the Christmas bear

The cats and us this year. They are getting into the spirit. This will be Lily’s second Christmas with us and Lucy’s first.
.

.
Had to put a few decorations away. Cats in the past enjoyed the colored silky thread covered styrofoam ball ornaments. Sure, I trimmed them; they were looking shabby. Kept the good ones and placed them in a container with decorative pine and holly holiday picks.
.
Lily flips one out of the container. Had a fantastic time batting the ball across the floor. My heart sank when she unraveled half and it was in her mouth. Much like a wad of cotton candy. Ran over and grabbed it. Only to realize I didn’t get every piece. Hard as I tried, I couldn’t get her close enough to rescue the last piece.
.
Why do they not let us help them when they are in trouble? Checked to see if it wrapped around her tongue, but no sign of it. Waited with rubber gloves. For 2 days, I checked the litter box. So grateful I found the red thread exited her body.

.
Lucy knocked one ornament off the tree (we have plastic ones for the sake of the cats). It went clank, clank on the hard floor and she took off running far away as possible… maybe the shell shock from the lamp crash from 3 weeks ago firmly embedded in her mind. Had to laugh.
. 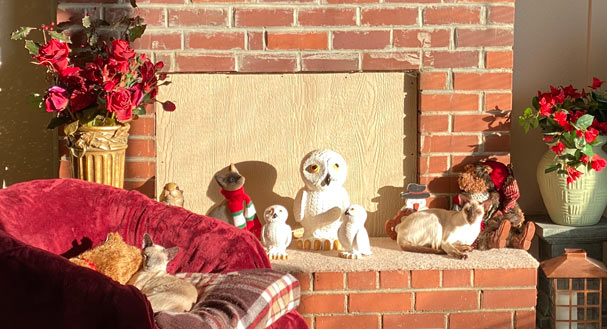 .
Cats in the past tried to climb the tree, only abruptly halted by the pitch on their paws. Fir needles are not the best thing for cats to consume. Too many, and they vomit. But I’m sure fir needles are better than sharp pine.
.
Oh… to think I had a flocked tree one year. My aggressive white cat was flipping his new Christmas toy in the air, only to bring the flocked tree to the floor and busting a few of those gold and red glass balls. Knew little about rearing cats back then. We even put icicles on Christmas trees for several years. A miracle the cats survived our lack of good cat parenting.
.
Our cat-parenting knowledge changed. Then we planned the tree for the cats. Made many felt ornaments to keep the cats safe. Hence the styrofoam ornaments. A fun game to guess how many ornaments were on the floor by morning.
.
They loved to run through the presents chasing each other, pulling the bottom branches of stringed lights. By the time Christmas arrived, the bottom third of the tree was in shambles.
.
My daughter encouraged the cats to run through the stacks of packages under the tree. With hopes to dislodge the presents from their positions. Better yet, torn open to get a glimpse inside.
.
Times have changed and no presents under the tree.
.
A large clip attaches the tree skirt to itself so it remains around the tree no matter how ruffled it looks.
.
The new kids run around the tree. Don’t bother with the decorations much. Do have better hangers for the items. Not to keep them from knocking them off. Just a new upgrade in the decor.
.
Strung lights attached to the tree made the chore of decorating much easier, as none of us liked the task. True, the artificial tree doesn’t smell as wonderful as a fresh cut tree, but simplicity is more my style now. If the cats decide the tree is not worth their time; okay with me.
.

.
They mess a little with my artificial flowers and a few of those interesting Christmas decorations. Some I refrained from displaying this year.
.
Maybe next year I will get brave and drag out the questionable ones that might enter the danger zone with the cats. A cat attack on my gold mache giraffes or the fuzzy sheep could end in tragedy. Where many toy mice have ended. (Lucy’s toy mice death toll, lol)
.

.
Many years ago, I fixed a big Christmas dinner. The cats stuck close with anticipation as the festive odors filled the air. Filling a large plate or 2 with turkey, to put them in a turkey coma. The only way to eat in peace.
.
I don’t do that anymore. Too much work and food for two. Prefer something simple and enjoy a quiet day. I don’t think the cats care if turkey, chicken, or salmon are on the menu. Bowls filled with food they love are the highlight of their day. 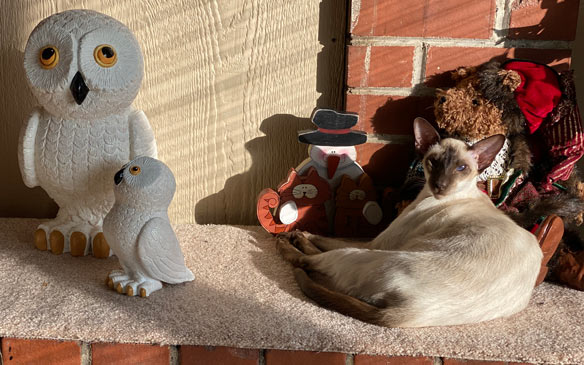 Christmas for the Cats

.
Will bring out 3 or 4 new sheets of tissue wrapping paper for the cats. They like to slide around on them and hide toys. By day 3, pieces are scattered across the living room. Entertainment for them and us. My living room always resembles a cat’s playground.

.
This year I refrained from wrapping a tiny holiday scarf around my cats. Only because I’m having back issues this season. Lucky for them! The scarf from a stuffed animal that was scrunched in a box, now tossed. The scarf now adorns the Siamese cat statue.
.
Next year I hope to do a photo shoot with them wearing the scarf. Have tied a red ribbon around cats to get a few pictures. In my defense… they didn’t mind.
.
Not a fan of putting them through the drama of costumes. Dogs do whatever their owner wants. Cat’s response is to fall over… a visual cry for “This is not my thing… take it off!” If they are okay with the odd occasional photo op, no harm done. But if they run away, forget it, give them the respect and dignity they deserve.

.
Our first cat was accustomed to wearing doll bonnets when my daughter and her friends dragged him in the bedroom to play. They put him in the doll bed and adorned him with a bonnet. Pulled the blanket over him as he continued his nap. Eventually, he had enough nonsense and left.
.
Aside from the fun of Christmas with your 4-legged furry family member, a serious concern. Holiday Dangers for Cats read more.

.
May your cats give you joy throughout the season and all year long.
..
. 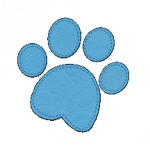 Do you have willing cats to take a photo with a ribbon, bow, or some other festive attire?