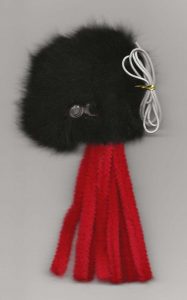 With a toddler, you learn to put dangerous things out of reach. Different when you own a cat. Putting things up isn’t good enough. It needs to be in a cupboard or a drawer.

Bread ties with wire was a great magnet for my cat Freckles. Sound asleep in another room. Take out the bread, lay tie on the counter, walk out the room, and return 20 seconds later. Bread tie gone! She was on the floor playing with it. Figured the wire wasn’t good for consumption, no matter her intentions.

Garbage cans: For years, the bathroom garbage can wasn’t a problem. Then along came Minnie. Don’t know what attracted her to it. Daily ritual of tipping it over and pulling out things.

No more dental floss allowed in the bathroom garbage. One disposal was not quick enough. Panic. She had swallowed the floss. Vet’s office was not opening up for a couple of hours! Out of desperation I force fed her butter, hoping that it might coat her intestines and may expel the foreign matter.

Took her to the vet when open, they sent me up the street to the emergency clinic, so they could retrieve contents of her stomach. Six hundred dollars later, still no dental floss. Now a waiting game to check her stool. Hoping for no internal damage. A sigh of relief when I checked the litter box. Expensive lesson. Bought a heavy-duty metal can with a lid, aka cat proof!

Sewing: Same cat grabbed a ribbon attached to a stylus for my embroidery machine, seconds after I left the room. When she came flying into see me, the stylus was dangling from her mouth. Did she realize the predicament and came to see me for help? Can’t leave that unattended ever again!

Pin cushions, needles and thread, even a spool of thread, are hazards. They’re clever as a magician and his bag of tricks. Even a sewing machine with thread dangling is fair game. They sneak in, grab the thread and gone in a flash. The times it happened, I was quicker than their get-away. Scary to pin a cat against the table to prevent an escape.

Rubber bands are another thing they might grab. I’m so accustomed to putting them on my wrist. Nine years of cats not getting on the counter or dressers. The habit of putting rubber bands on my wrist remained. The transition to new cats reinforced automatic reactions to keep them safe.

Cat toys should be safe! Not necessarily so. The fishing line toy has a piece of cloth tied to a cotton fishing line. Left the room for a brief period. Upon return, Minnie had devoured half the line and cloth. Happy to see it later in the litter box. This toy now requires strict supervision.

Another dangerous toy was a bird on a stretchy elastic string. We had it hanging on the cat tree. Andy was playing with it one night, grabbing it, and it sprung back. The elastic wrapped around his neck. My husband heard him struggling and gasping. He got him loose. Hate to imagine what might have happened. Don’t know if his falling could have broken the elastic or strangled him to death.

When I acquired a furry spider with elastic string, this was a no-brainer. I cut the elastic off, removed the jiggly eyes, and bend the ends of the pipe cleaners back. The elastic toy can be fun for them, but NEVER unsupervised. It’s meant to hang on a doorknob. But remember it can fly back and wrap around them. I have swung it around as they grab the flying spider. But return it to the cupboard when play time ends. 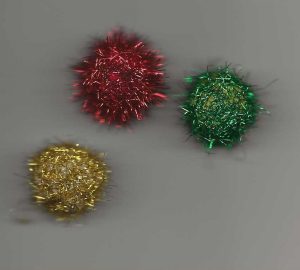 They may not make cat toys with safety in mind. Maggie liked the pom-pom balls. These were part of a kitty stocking full of cat mice. Soon discovered the balls had pieces coming loose. I threw them away. Went to the fabric store and purchased suitable balls. Tugged on them and no parts came loose.

Cats can be rough on toys, so check them after use. Cut loose stitching or even toss the toy. Favorite toys; consider repairing. Molly took nine months before she played with a toy purchased for her. She packed it everywhere. Only solution was to keep it repaired. If you’re lucky, your cat will love the new toy. Then try to get more. Minnie loved the furry spiders. I bought ten of them.

I’m so programmed to keep things out of the reach of cats. Staying in a hotel, I catch myself taking the same safety measures. A good habit if you own pets.