Taming of the Wild Cat 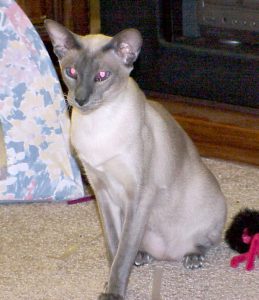 The previous articles on kidney failure and cats grieve bring us to this article on acquiring another cat out of necessity.

Sudden death of our oldest Siamese to kidney failure resulted in Maggie distraught with constant crying. Forty-five days later, things got worse. Weight loss. Desperate, we contacted the breeder of our last 2 cats.

Had a 2 ½ year old blue point Siamese. She looked similar to the one we lost.

Thought this to be a peaceful transition.  But unprepared for one freaked out cat.  She (whom we named Molly) darted in and out behind furniture. We pulled the loveseat out away from the wall, to expose her hiding spot. Visual interaction needed for her. Put water, food, and litter box in the living room where she felt safer.

Maggie not thrilled with her new roommate. Plenty of hisses, but no longer aimless crying. A watchful eye on the intruder kept her busy. She put on more weight.

We had to make this work.

The first week clouded with thoughts of ending this episode of intervention and return her. A glimmer of hope stopped me.

Molly didn’t look at us. But aware of where we were. Over a month before I could touch her.

Pretended to be asleep. She crept up against my leg, out of arm’s reach. Many attempts before able to touch her with just a finger. Gone in a flash. After several encounters, she allowed more brief touches.

Even when she curled up sleeping with Maggie, trying to touch her was a challenge. Got a few touches.

Three months later, able to convince her to lie on my lap. A few quick strokes and zip, vanished.

The day of change when she let me give her a vigorous back rub. At one place on the sofa. No trust anywhere else in the house.

If she was in the kitchen and we entered, she made a mad dash for the door.

With robust back rubs, no purring. Wondered if she was incapable of purring. One tiny meow in the car on the first day. Nothing else.

Five months into her arrival. Petting her on my lap, I felt a slight vibration coming from her, a faint sound. Eureka! Yes, she was purring. Ecstatic. Like the joy of your baby saying their first word.

A big break-through, another week, loud enough to hear without straining.

Each success, another milestone.

When she got on my lap, I held on to her and tried to sit somewhere else. She squirmed and escaped. Marked each little progress as a triumph. Normal things were a big issue for her.

She bonded with me.

After four years, my husband made progress with her. I could pick her up in the kitchen, hand her to him. She allowed him to pet her and yes; she purred.  But nowhere else.

I still had to trick her into letting me clip her claws.

After 4 years when she needed help, no way she let me near her.

She ran fast, maybe learned that from necessity. Molly was the funniest cat we ever had the pleasure of owning. Made us laugh with her comical expressions. The joke was, she thinks with her ears, as they are always moving in different directions and zoom, off she ran!

What happened, not sure? But I have a theory. Raised in a breeder’s house under foot, but I guess she was the shy one. The breeder was single and worked, went to cat shows, with a busy schedule, allowed Molly to be herself. The breeder had minimal interaction with her. Cats benefit from human touch to be social.

Visiting the breeder’s house, she hung around us but watched from a distance. Since she liked to play, she engaged in a ‘chase the string game.’

The other cats were super friendly. She knew how far to keep the distance and not get touched.

Another theory for her quirks. More aggressive cats in the house could account for her run and escape techniques.

Molly was always the bottom cat; she put her head under Maggie’s chin. She knew her position in the house. Well learned from her previous residence.

Her last five years were a transformation. She became a loving social cat and got on stranger’s laps when they came to visit. A complete 180 from her first day. Missing Molly is where you can read more of her transition.