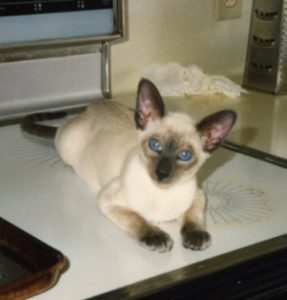 Mother cat tried to deliver kitten number 3, when we arrived at the vet’s office. First one was stillborn. The second one lived. Number 3, larger and stuck in the birth canal. Got her in the exam room and soon after he was stillborn.

Within minutes out popped kitten number four, smaller than the first two. One vet grabbed her and disappeared. Half hour passed.

When they emerged with the kitten, the news was mixed. She was alive but had a burst hernia.  They had sewed her up and administered antibiotics. Sent us home with antibiotics.

It shocked them when we arrived in ten days. As the years passed by, they shared the prognosis; it wasn’t a 50-50 chance for survival; it was less than 10%.

We named the kitten Holly, a perfect name for a miracle baby.

At 4 months of age, we took Holly in for the hernia repair. The vet told us her heart skipped a beat when she opened her up and found the intestines tangled. She only weighed 2 ounces at birth, making it hard to arrange everything in the right position. With birth size and medical issues, it was miraculous she survived.

Everything went fine with Holly until she passed her second birthday.

Why do pets have major problems on holidays, weekends, or after office hours?  Don’t they know it’s more expensive or may suffer longer until you can get them help?

The 4th of July she vomited bright yellow. Next morning, I called the vet’s office and requested to bring her in right away. Lady at the front desk suggested a hairball. Rare for Siamese cats to have this problem. I insisted the yellow vomit isn’t normal. My suspicions were correct. The vet gave her antibiotics, sent us home with medicine and the info for the emergency clinic.

It took 2 of us to administer the medicine twice a day. Terrible taste so can’t blame her for fighting. After giving her a dose Sunday evening, she took off and ran into the kitchen. She started to run back out and collapsed on the floor.  Limp as a rag.

Scooped her up and drove to the weekend emergency clinic. They started a barium test and administered fluids.

They kept her overnight and Monday morning we called our vet’s office as soon as it opened. Doctor scheduled off for the day. But came in and operated on Holly. She had to take out part of her intestines as they had grown together.  They put her on oxygen. Administered an IV of fluids and medications. She might not survive.

Holly developed asthma due to this illness. Difficult task to find the correct dosage of medication to keep her healthy.  We took her to the vet’s, about every three days during July. Obstacle, our daughter was getting married in July. Holly didn’t get sick and need emergency on the crucial days of the wedding plans. (Good kitty!)

Found a dosage that regulated her issues to keep her stable.

By the time she was six and a half, it no longer worked. Her lungs filled up with fluid. We tried other medications. Exhausted all avenues, we were now being referred to a specialist.

A method to help her breathe better, take her in the bathroom when we showered.

Next suggestion; tent her in a cage with a humidifier.  She didn’t enjoy getting wet. But was breathing better. Holly adjusted to the twice daily hour-long treatments.

Her lung x-rays improved only to get worse with the following test. The next step was to get her used to breathing in a plastic bag. Sounded strange. Purpose was to treat her as they do people with severe asthma. But she needed to get used to the bag over her face.  The treatment was to start within a week.

In the morning before Holly’s seventh birthday, I found her lying on the floor. She had died during the night. So sad, I know it was difficult for her.

Holly, what a fighter. She had a strong will to live and beat the odds from day one.