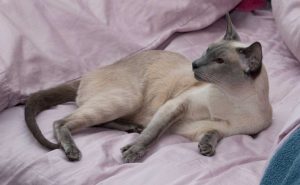 The house stands silent. No more laughter. No more hellos in the morning.

Glance to my right as I walk by the sofa. Molly had sat perched on the white blanket, anxiously waiting to meow good morning to me.

Our conversations have ended. Now I’m greeted with the deafening silence.

If I dwell on the overwhelming grief, even the simplest of tasks as brushing my hair can become monumental.

She came to me as a wild scared cat at 2 ½ years old. It took five months of patience to get a slight murmur of a purr. Once she learned how to purr, she purred if you talked to her. When she became happy, she radiated love.

The purpose of her arrival was of the anguish the resident cat Maggie was having. Her couch buddy had died of kidney failure. Maggie’s howling and rapid weight loss over 6 weeks was alarming. Desperate to find a solution, I got Molly.

She was a 6-lb. blue-point Siamese.

The first day I brought her home, she hid under the desk in the office. Dragged her out and closed the door. Terrified, but not a hiss, growl, or claws from her. The 13 years she lived with me, I never heard her hiss or growl.

Her fur was dull and dingy. It took months before she let me pet her. A year later her coat glistened.

Feline wit against human determination existed for the next 4 years. Took over a year to capture her for a claw clipping escapade behind the closed bathroom door. I sat on the floor to tackle one claw at a time. A trick in maneuvering her little body after each success of one snip.

It took two years to do the 18 claws in one sitting. Another year before I could leave the bathroom door open. Even at the end, still a task to outsmart her when time to clip claws. She always complained, but a faint meow was much better than a howl of proclaimed torture from the bathroom floor.

We had this special bond. I understood her fears and insecurities.

With patience, I won her heart.

She was madly in love with me, and the feeling was mutual. 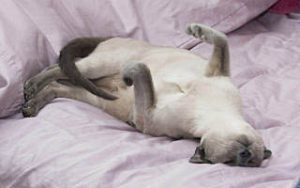 Our conversations consisted of asking Molly simple questions, such as “Are you cute?” For 15 minutes she responded with varying meows. Amazing and comical since she had said nothing for the first 4 months.

She showered me with kisses on the face and if I didn’t want to cooperate, she flashed a vertical frown between her ears and held my face with her paws. If I put my hands over my face, she tried to yank them off with her claws. This ended in laughter and a kiss on her nose, which didn’t faze her.

She was funny and endearing, different from my previous cats. A quirky sense of humor. On occasions, the ceiling held mythical creatures that sent her on a wild run through the house.

She never jumped on the counters, dressers, or kitchen stove. My other cats ignored most rules.

After she died, I cleaned house. Painful to see the blankets she laid on or the empty cat bed by the fireplace. Moved the 6-foot cat tree to the other end of the living room. To see it when I sat on the sofa was devastating.

Yes, I want to remember her, and I always will, but the heartache needs to heal.

Two kittens could fill the void with laughter and little meows, but no rush now.

(The two kittens are the creation of this site.)

The last 5 years Molly enjoyed the prestige and attention of being an only cat, and I promised to keep it that way. But the price. A broken heart, with no furry refuge to bury my tears of sadness.

Grateful for the privilege and honor to be my little Molly’s best friend. She forever changed me.

Years ago, December 3, 1990 Sammy died. She had major surgery and her blood didn’t clot, even after half her blood volume in transfusions were administered. Devastated with sorrow, we buried her in the backyard. Sadness took me out to the spot often.

One day I came to the conclusion that someday we would move. This was not the way I wanted to leave her.

I called the pet cemetery as to what I could do to have her cremated. Water the area for a few months and then I could dig her up and bring her to them. Prepared for fur, etc. one day we placed a large plastic bag on the ground. Relieved to find only bones, adhesive tape from the cardboard box. We placed her and nylon thread from the towel she was wrapped in. We sat there on the ground amazed at the tiny bones and hoped we got them all.

She is in a box on our dresser. I have not cremated all of my cats, some went to the mass burial at the cemetery. Choice is how each one grieves. Having a box I can swipe my hand across in memory of, seems to be an ease for my losses.