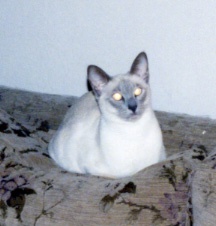 Some cats thrive on being an only cat, and then the odd one can’t cope.

Minnie, a much smaller cat than Maggie, but she ruled. Smacking matches took place with fur flying. Other times they cuddled, washing one another. After naps, things were peaceful or erupted into a fury.

We missed Minnie. The thoughts to be a one cat family were the plans.

Maggie cried and cried, looking for Minnie. We tried to comfort her. Picked her up, giving her hugs.

She had spent little time with my husband. The interesting part. It must not have been Maggie’s choice to be aloof with him. With Minnie gone, she became more relaxed and enjoyed the attention.  (Three years later she became his Velcro cat.) Presumed in cat language, Minnie told her to stay away from him.

Hopes with this extra attention, Maggie could enjoy her new position of being number one and only cat. But not the case.

A month later and the crying continued. She lost weight. Worried her health now in jeopardy and the thought of losing her loomed.

The end of February. Bad time for acquiring a kitten.

I contacted the breeder. Hoping she might have a female kitten. She had none, but she had a 2-year-old. We were desperate for Maggie’s sake. Went to check out her possible new roommate.

Pleasantly surprised. She resembled the cat we just lost. But that is where the similarity ended. (And that is another story!)

Molly, the new cat, was not happy with her new accommodations. But her presence got Maggie’s attention. The crying stopped. Instead, it was hiss, hiss, and at times, a low growl.

It took Molly time to adjust. Soon her best friend in the house was Maggie. She respected Maggie as the top cat.

Mission accomplished. Maggie started putting on weight. She now had the best of both worlds. Her own cat and people in the house to herself.